Your Ascendant or Rising sign is the mask that you present to others when first meeting them. This is the attitude or appearance you give off as the first impression to others. This particular placement is in the first house of your natal chart.

Your Rising sign is in the zodiac sign that was positioned on the eastern horizon at the time of your birth. Therefore, in order to find your Rising or Ascendant sign, you’ll need to know the exact time you were born.

If you are even a few minutes off, you can get an entirely different sign, so check that birth certificate before calculating! Luckily, there are plenty of zodiac calculators out there to help you determine your Rising sign and full natal chart.

What it means to have Scorpio Rising as your Ascendant sign

Scorpio is a water sign, so if you have this zodiac sign as your Rising sign, your attitude, appearance, and the first impression is mysterious and aloof. This is because Scorpio is a guarded sign and doesn’t open up easily. They understand that the world is not always a safe place and often look out for themselves when meeting new people.

Scorpio’s ruling planet is Mars, the same as Aries. Since Scorpio is ruled by Mars, you would expect them to bring the fire but, in actuality, Mars influences Scorpio energy like a volcano: The lava is held underground just as Scorpio buries unprocessed feelings and punishes themselves for mistakes made in the past… until they blow up.

As a fixed sign, Scorpio Risings can be a bit stubborn. Once they make up their minds it’s hard to get them to move, and getting them to admit their wrongs is near impossible. Being a fixed sign gives stability but it also means they are stuck in one spot.

People with Scorpio Ascendants are problem-solvers and are detail-oriented. Careers that require focus, critical thinking, and attention are where Scorpio Risings thrive. Some career areas include research fields, writing, finance, and law.

RELATED: What Your Midheaven Sign Means, According To Astrology

This Rising sign also often feels out of touch with their environment, like a fish out of water. They have strong intuitive powers; this is why they talk less and come off as calculated. They move wisely around the world and those within it, rather than barreling through them.

Scorpio Rising people are strong-willed and have no problem standing up for what they believe in. Because of this, they are incompatible with other Scorpio Risings, but are best matched with their fellow water signs, Pisces and Cancer. They are also extremely attracted to Taurus Ascendants who share their same sensual nature. Earth signs like Virgo and Capricorn are also well suited for Scorpio Risings.

Scorpio Risings hold a sense of mystery around them, which makes these people very, very attractive to others. They have a sense of power that surrounds them and draws people’s attention.

Though they may not be easily approachable, they are the people that many want to get to know.

Scorpio Risings are perfectionists and are always ready to move on to the next task after finishing another. They don’t wait around and contemplate their already finished task; rather, they go looking for the next best thing to accomplish.

They often rise through the ranks at work quite easily because they are always willing to tackle anything thrown at them — and they do it with grace.

People born with Scorpio Risings are extremely guarded people. With Scorpio Risings, don’t expect to get to know them in the first five minutes. It’s a slow burn with them, so they’ll let you in a little at a time until they can truly trust you.

Scorpio Ascendants are brave and courageous. They speak their minds with little opinion of what others think of them. They take risks, but calculated ones, and they will only take them if they think it’s worth it. 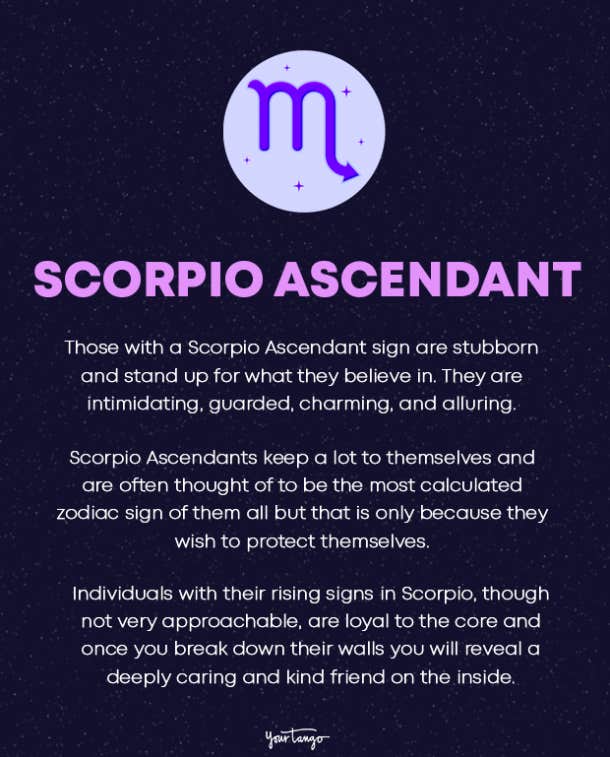 RELATED: What Your Zodiac Ascendant Rising Sign Personality Traits Are, Per Astrology

Scorpio Risings are fascinating people because of their mysterious nature. You never truly know who they are until their guard is all the way down. Because of this, they have perfected a charming personality to avoid certain questions.

Advertisement Are you ready for a relationship? Click here to get clarity with a psychic reading!

When Scorpio Risings turn on the charm, you know that they are now in charge of the conversation.

This may be a surprise, but Scorpio Risings are actually one of the kindest signs out there. They often get mistaken as cold, but this is only because they protect themselves.

Once their guard is down and they show their true self to you, they are one of the best to have in your circle of friends. They care deeply and fiercely protect their close friends. And they can be quite friendly once you get to know them.

Scorpio Ascendant people are extremely loyal. They will defend you to the death if they believe in you and will be by your side in any fight, even if they don’t agree with you (and they will let you know they don’t agree).

Scorpio Risings can be intimidating. Many people don’t come up to them because of their stern features and the energy they put out. Though many wish to know them and be their friends, they can be scared off by how Scorpio Risings hold themselves in social situations.

They are calm and chill, but their eyes will look over and read every person before getting to know them. This is one of their defense mechanisms: keeping people out rather than letting them in and getting hurt.

Deauna Nunes is an associate editor who covers pop culture, lifestyle, zodiac, love and relationship topics for YourTango. She’s been published by Emerson College’s literary magazine Generic. Follow her on Twitter and on Instagram.