Testing the Astrology of Bitcoin

Bitcoin’s latest crash on Monday 9th May 2022 matched an astrology pattern you read about on this website 12 months before. It’s really no mystery. Every time we see transits at 0-1 degree and 18-19-20 degrees at the same time in astrology, Bitcoin hits an extreme. (Main image: Art Rachen, Unsplash). 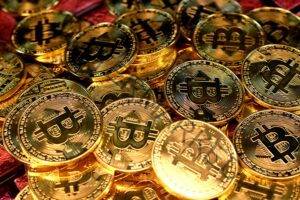 The same pattern showed up on Monday 9th May 2022. Sun 18 Taurus. Mars 18 Pisces. But we’re not at the end yet. There is another larger astrology pattern for Bitcoin coming up within a few days (I am publishing this on Tuesday 10th May). Another spike.

Do watch the historic transit of Jupiter at 0, 1 Aries from Wednesday May 11th until Saturday May 21st. Within that window, you will find Ceres at 0, 1 Cancer on Monday May 16th until Friday May 20th. That narrows down the dates for Bitcoin astrology drama. (Image: Kanchanara, Unsplash).

Looking for more transits that fit the Bitcoin astrology pattern, on Thursday 19th and Friday 20th May we find Venus at 18 and 19 Aries. That now gives us just two dates.

Mercury moves to 1 Gemini on Friday 20th May. Nailed it. Bitcoin (as CNN reports below) has already fallen more than 50% on May 9th 2022. That’s right on the patterns we’ve seen before. The astrology for Bitcoin suggests you need to track Friday 20th May in particular for extreme spikes on the graph. 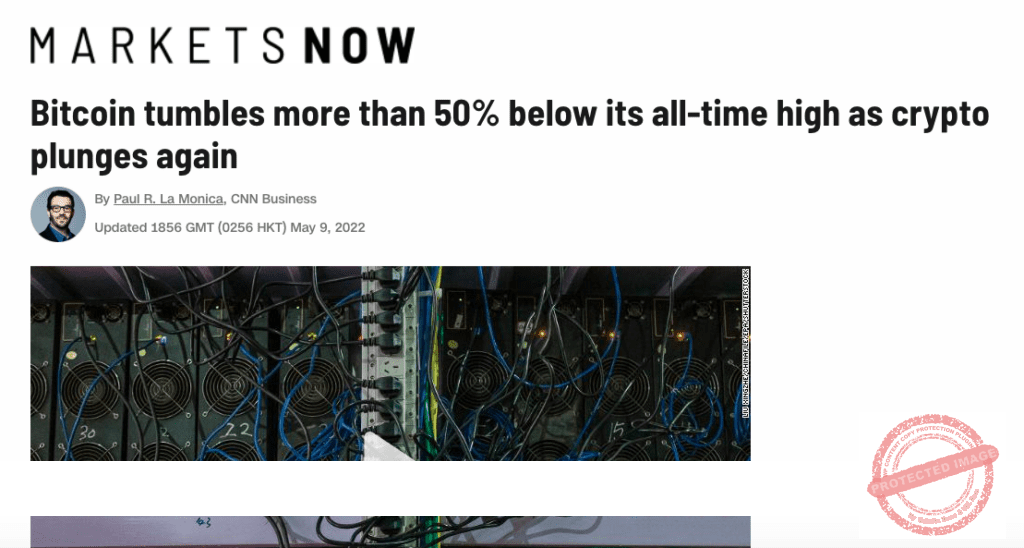 I am publishing this on 10th May, so around ten days ahead. This will be a good test for the horoscopes to see if they are consistently working.  On 20th May, Mercury at 1 Gemini flips backwards to its previous position on Monday 2nd May. That’s a reversal on the market. Incredibly, we also find Ceres at 1 Cancer and Jupiter at 1 Aries on exactly the same day. That never happens!

I guess you can allow a day either side for the working world to catch up with itself. Thus, Thursday 19th May and Saturday 21st May.

Satoshi Nakamato, the mysterious Bitcoin developer, has a supplied an April 5th, 1975 birthdate. That gives us Venus at 19 Taurus and Uranus at 1 Scorpio. The astrology of Bitcoin rests on the horoscope of Satoshi Nakamato. We have an astrology chart for Elon Musk (the most profiled man on Twitter at the moment, as the @Newsmax account shows) based on the information about his birthdate, given on his son’s birth certificate. This is at astro.com.

Does the Elon Musk natal chart fit the pattern for Bitcoin? Yes, it does and you can find out more Here.

Even more importantly, this is the chart of a man who was here to pursue the motor vehicle industry (Saturn in Gemini, Venus in Gemini, Mars in Gemini) and likewise Twitter (Gemini rules both transport and the media). Outer space? That’s Musk’s Neptune in Sagittarius. ‘To the stars’ as he says. This entire pattern in Musk’s destiny, pulling in Twitter, Tesla and Space X, ignites on 20th May 2022 – in a way not possible in at least 12 years.

The Tesla Chart Fits the Pattern

The Tesla chart also fits the same degree pattern. Born on 21st December 2020 at 9.30am in Manhattan, Telsa has the Sun at 0 Capricorn and Mercury at 1 Capricorn.

This chart must have been handpicked. The moment must have been deliberately chosen by Musk – if not, it’s one of the greatest coincidences this astrologer has ever seen.

Jupiter is at 0 Aquarius, Saturn is at 0 Aquarius. Neptune is at 18 Pisces. The North Node is at 19 Gemini and the South Node is at 19 Sagittarius. Remember the horoscope hotspots: 0-1 degree transits and 18-20 degree transits.  Thanks to Kate Silas, former Wall Street financial astrologer at Profit With the Planets,  for the Tesla data and chart. 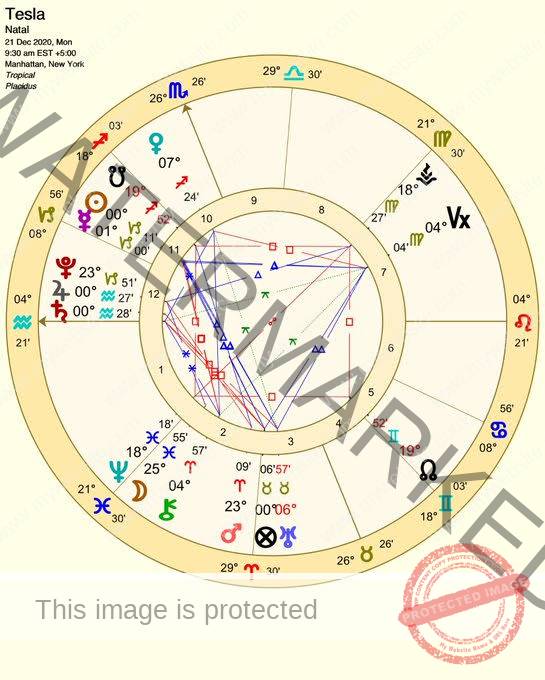 Terra, Do Kwon and Astrology

I mentioned astrological charts connected to Bitcoin showing the same pattern. Well, Terra founder Do Kwon confirms he was born on 6th September 1991 on Twitter.

He did not give a time or place, so we use 12 noon and Seoul, Korea for the chart, but as the founder of Terra, Do Kwon shows the same astrology patterns. Saturn at 0 Aquarius. Note the way that Do Kwon’s personal birth chart aligns exactly with Tesla. Thanks to Kate Silas  for the data and chart. 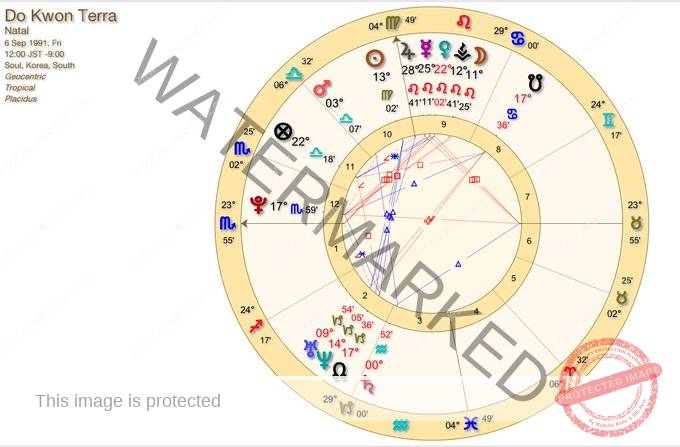 The Catch – It’s All About Your Chart

There is no one-size-fits-all formula to make money with this cryptocurrency, or Bitcoin would simply not function. Your chart has to have the right patterns – or crickets.

Always look to Taurus (your income) and Scorpio (joint finance) in your chart, and see what is there, what it means, and the patterns it makes with the rest of the chart. 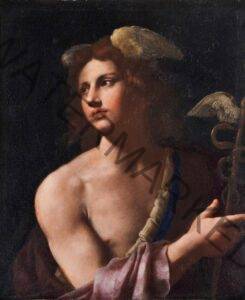 The other classic astrology indicator of market chaos is Mercury Retrograde. We find him on a loop at the crucial degrees for Bitcoin (0-1) and he began that circuit on Saturday 30th April, Sunday 1st May, Monday 2nd May 2022. What was ‘confirmed’ then or announced will go backwards.

Mercury has always ruled merchandise, merchants and the markets. He was the Roman messenger of the gods. The painter Giovanni Domenico Cerrini created this image of Mercury (he lived from 1609 to 1681). He is looking backwards in the painting.

When Mercury is retrograde he literally travels backwards. In Gemini, that’s Twitter and Telsa. In Taurus, that’s Bitcoin and Wall Street.

We will see the first repeat, and backward loop, when Mercury goes to 1, 0 Gemini on Friday 20th May, Saturday 21st May, Sunday 22nd May, Monday 23rd May. Chaos. And it includes the date we narrowed down, which is Friday 20th May.

The final loop for Mercury Retrograde is Tuesday 14th June, Wednesday 15th June, Thursday 16th June 2022 when Mercury goes back to 0, 1 Gemini for the third time. From there, the story is over. But what a story.

Below – What CNN told us on May 6th 2022 was predicted on this website, in 2020. Two years before. Mercury Retrograde in Taurus, the sign ruling Wall Street itself, is always flux and drama on the US markets. 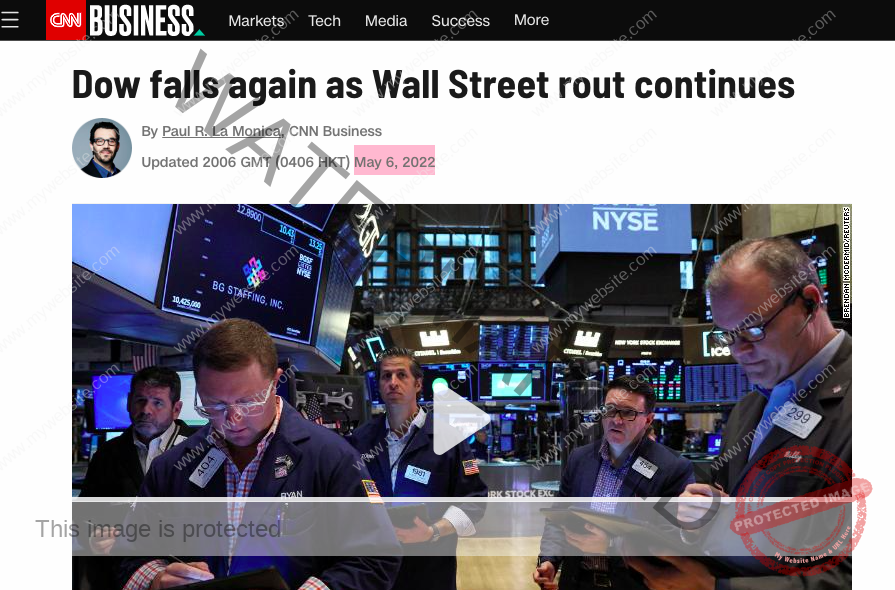 I like to give readers, especially Premium Members, at least a year’s warning before the economy goes into flux. So, this is a warning about Mercury Retrograde published  back in 2020, two years before it (just) happened. What you thought was fixed on 29th April, is no longer fixed. And you are heading for more flux from 24th May to 13th June, below. Watch for “Unpredictable, sudden turning points.”

Watch El Salvador and Bitcoin too. Why? Astrology date-stamped the day it became legal tender in that country.

The Ceres-Uranus “explosive” conjunction referenced in my video  (June 9, 10, 11, 2021) was a fiscal revolution. Business not as usual

On 9th June 2021 Reuters reported it, but you saw it here first, in The Taurus Weather on YouTube. What happens to El Salvador in April, May, June 2022 is part of the chaos. Watch at 1.46 about the “new deal” and “carve-up” in the global economy, because that was El Salvador.

Do Your Own Research on Your Own Chart

Do your own research on your own astrology chart and make your own choices, but in the interests of open information and free knowledge, those are the Bitcoin patterns in astrology.

For whatever reason, Elon Musk, Bitcoin, Tesla and the creator of Tether have all landed on the planet with astrology charts that connect at the same degrees.  If you find the same degrees showing in your chart, you need to grab a diary, track the dates and see what happens to your Second House (ruled by Taurus) and Eighth House (ruled by Scorpio) as you watch Bitcoin rise and fall. I don’t tell anyone what to do with their investments, by the way. It’s completely your choice.

The Future of Bitcoin

Bitcoin will only change the world economy until April 26th, 2026. From that point it either vanishes, or people no longer care as they once did. April 26th 2026 is the end of the Uranus in Taurus cycle.

Bitcoin Dates to Watch in 2022

There is a window for Bitcoin astrology drama here, closer to the usual 18-19-20 degree and 0-1 degree pattern we see when there are bit spikes on the graph. Uranus 18 Taurus, Ceres 0, 1 Leo, North Node 19 Taurus, South Node 19 Scorpio from July 24th to 28th, so just a few days before the next episode. And that happens to be –

Any astrologer worth her salt/his salt has been talking about the Mars 18 Taurus, North Node 18 Taurus, South Node 18 Scorpio, Uranus 18 Taurus line-up on Monday 1st and Tuesday 2nd August 2022. Economic shock and instant karma. No other way to describe it.

This pattern is similar to March 6th and 11th 2013 when Bitcoin declined 33% in value.  Back then, we found the North Node at 18 Scorpio and South Node at 18 Taurus.

Here’s another one. Saturn at 18 Aquarius, Uranus at 18 Taurus (the Saturn-Uranus Square, they call it) on the same two days that Jupiter goes to 1 Aries. We also have a financial cover-up on Tuesday 25th October 2022, because there is a New Moon Eclipse at 2 Scorpio. An eclipse always conceals it never reveals.  Scorpio is money.

Sun 18 Scorpio, Mercury 19 Scorpio, Saturn 18 Aquarius. What we’re seeing with these Aquarius aspects to Taurus and Scorpio is the clash between individual greed and the welfare of the group. The hive mind and the network/community/circle and the contrasting financial self-interest of just one or two people.

November 11th is abrasive and it features that 18, 19 degree pattern.  There is another cover-up on Wall Street the same month, with the eclipse on Tuesday 8th November 2022. The Full Moon is at 16 Taurus opposite the Sun at 16 Scorpio.

You can read more about Elon Musk, Bitcoin, Taurus Weather and Uranus in Taurus on this website. Hit Search.