The Taurus New Moon Eclipse of 2022

I’m just going to recap an old prediction about this New Moon at 10 Taurus on Saturday 30th April. This is the flashback here, and it’s about our money, houses, apartments, business interests, charity interests and shopping patterns. I published it on 2nd June 2021 to give you plenty of warning, a year ago. One of the most obvious outcomes? Chaos with Elon Musk’s Twitter purchase. I’m going to write a further post about why he may actually be using Mercury Retrograde deliberately. But for now, this is the prediction from last year, so you know exactly what is coming up for you.

What To Do, What Not To Do

This is an eclipse, which is always a cover-up and blind spot. You cannot see what (or who) is staring you in the face. There may be a deliberate cover-up which affects everything. Always look for the main event distraction on an eclipse. Don’t be diverted, go back and consider what you have seen and heard before the eclipse ever unfolded.  Below, the original prediction about the April 2022 New Moon in Taurus Eclipse, filed a year ago. 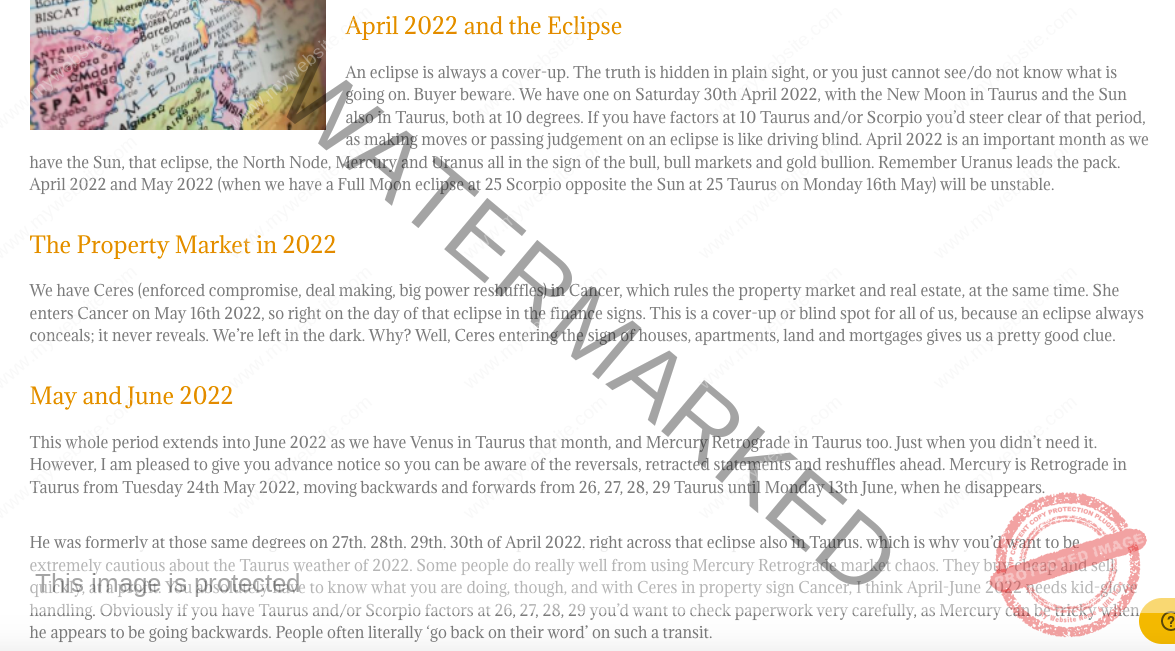 Tracking the Dates and the Taurus New Moon Eclipse

My old colleague Debbi Kempton-Smith used to avoid eclipses at all costs. She would allow a day before and after, which I still do. This one, in Taurus, in your natal Second House of money, shopping, selling, houses, apartments, business, charity, insurance, banking is really tricky. It falls with the Sun at 10 Taurus and Moon at 10 Taurus, so if you have anything at 10 Taurus (or Scorpio, the other money sign) you need to avoid.

It may not be until the lunar nodes pass 10 Taurus and 10 Scorpio between January 8th and 18th 2023 that you realise what or whom you failed to notice, back on April 30th. Don’t get caught.

Mercury Retrograde in Taurus has gone viral according to Harper’s Bazaar. Having written horoscopes for the British edition, I know how important astrology is to readers. What you are tracking here is the Taurus loop, which of course rules your money. It began with Mercury passing 26 Taurus on Wednesday 27th April. This was about the moment Elon Musk declared he was the new owner of Twitter. Accident?

I see a lot of people online getting Mercury Retrograde badly wrong. Don’t be fooled. The planet of paperwork, the media, the internet, the mail, transport, trade and travel goes forwards, disappears, reappears, goes backwards, retraces his steps, stands still, then moves forwards again – when he begins his Retroshadow or Mercury Retrograde Shadow Loop.

So, in April, May and June 2022 (yes, that is how long this thing will play out) you are watching Mercury move like this:

Some sharemarkets will be suspended.
There will be chaos on world sharemarkets including Wall Street as prices fluctuate wildly.
The Elon Musk purchase of Twitter may be cancelled or run into huge delays and rewrites.
Ceres goes into Cancer (property) from May 16th, into the June 13th ‘chaos’ period so prices will swing.
Don’t forget the eclipse – whatever is announced on Saturday 30th April is a cover-up.

If Your Taurus and Scorpio Factors Are Hard Work

If you have oppositions (same-degree placements in Taurus and Scorpio) then get it in writing on this cycle and read the fine print, as there may be issues. So, for example, if you have Saturn at 12 Taurus and the Moon at 12 Scorpio, you’d do that.

If you have Taurus and/or Scorpio factors actually at the eclipse degree (10) or the retrograde degrees (26, 27, 28, 29) then steer clear if you can. Unless you absolutely know what you are doing, and you intend to buy cheaply (say) and sell soon after that, just don’t risk the muddle. Mercury Retrograde is like a church bazaar or a jumble sale. Everything is all over the place and nobody knows what the ‘real’ price of anything is. I would anticipate anything from eBay to Deutsche Bank is affected by April 27th-June 13th. And as I said, I published the warnings a year ago so you’ve had time to prepare.

Along with Twitter, you’d be watching Facebook really closely during this time. Why? Chiron in Aries (which rules the face) is at 14 and 15 Aries, during this chaotic period, and is exactly semi-sextile Uranus at 14 and 15 Taurus.

Maverick Chiron is at 14 Aries on 1st May, side-by-side with Uranus at 14 Taurus. What happens from that point forward is pure punk rock. It’s jaws-on-the-floor. It’s outrageous. Can he, she or they get away with it, we wonder? We’ll soon find out.

You’d be narrowing down dates to Thursday 5th May for drama. The Sun at 14 Taurus is aligned with wild card Uranus at 14 Taurus then, and Chiron at 14 Aries. 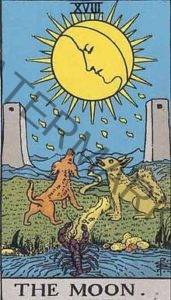 So It’s Not Just Another Taurus New Moon

Absolutely not. The cover-up or missing story about the economy, big business, cryptocurrency on Saturday 30th April is part of a much more chaotic scenario which will have a domino effect on all of us as we go through Mercury Retrograde in Taurus too. Pamela Colman Smith and Arthur E. Waite created a strong image of a. hard-work Moon, in their Smith-Waite Tarot, which you can use free on this website.

It shows the ‘not-knowing’ that we associate with any eclipse. There is always a sense of not being entirely sure, or being stuck. The stuck feeling with this card also shows Mercury Retrograde. When Mercury stands still, so do we – on the path we are on. You can see Pamela’s lobster here, which looks like a Scorpion. There is an answering call eclipse at 25 Scorpio opposite the Sun at 25 Taurus on Monday 16th May 2022. That is another blind spot. Look at the card closely. The dog on the right has milky eyes. There is no sight there. That’s us, on this cycle.

What To Do – Taurus Eclipses and Mercury Retrograde

Rehearse, test, research, discuss. Throw the e-mails backwards and forwards like a ping-pong game. Allow for computer, telephone or ISP issues. That is classic Mercury Retrograde. Allow for mail errors. Strikes can sometimes affect the story. So can extreme weather if it affects the electricity. I am sure if you are a regular reader you know the drill. You can search the original predictions on this website and if you are a Premium Member your flipbooks will show you the rest. This is a really good time to make rough calculations in pencil and have a rubber handy, to rewrite and scribble, again and again. Or delete!