The Japan Astrology Chart to 2026

People in Tokyo who follow me on Twitter via my astrology features on the VOGUE Japan website have naturally been interested in Japan’s economic crisis. As you can see, below, it’s making headlines all over the world in April 2022.

There are two accurate astrology charts for Japan. The first is set for 3rd May 1947 at 12.00 LMT in Tokyo. The second is set for 28th April 1952 at 1.30pm GMT in Tokyo. The source is The Book of World Horoscopes by Nicholas Campion, The Wessex Astrologer 2004. 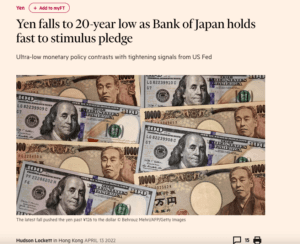 Both show different faces of modern Japan. Both charts also clearly show the biggest economic slump on record (August 17th 2020) and a 29-year market high, (9th November 2020). Both of those events can be tracked by the unpredictable, wild and shocking Uranus in Taurus transit. Uranus is the revolution. Taurus is the economy.

The Japanese Yen and Cryptocurrency

This is the beginning of the end of fossil fuel (coal, gas, petrol and kerosene-fuelled airlines) and the start of a clean, green world economy that will get rid of the Climate Emergency by 2026. The Japanese car industry, famous all over the world, is at the heart of this. So is the replacement of the yen by one world cryptocurrency by 2026. The hotspots in the Japanese horoscope are 8, 11 and 24 degrees of Taurus/Scorpio. When the news broke about the economic low, the transiting Moon crossed 8, 11 and 24 degrees of Scorpio, in opposition to Japan’s Taurus patterns and in conjunction with her Scorpio patterns.

Twitter tells the story of Japan’s unpredictable Uranus in Taurus transit, which began in May 2018 and ends in 2026. Bloomberg, below, detailed the weak yen (the weakest since 2002 against the American dollar) and back in 2020, when COVID-19 was just days away from being declared a pandemic, Reuters reported the Japan economy had fallen the most since 2014. What Uranus transits do, is produce radical, shocking changes when the known world turns upside-down and independence is the result. We will see Japan becoming an independent nation by 2026, which frees her from the world petrol car economy, but also from globalisation. Even – American values. There are two reasons for this. The first is Russia and the end of money laundering. The second is COVID-19. 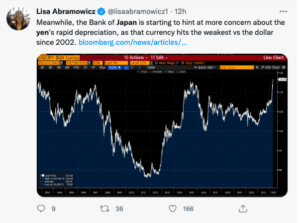 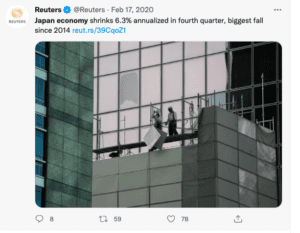 The new war is not military, so much as it is economic. Trade sanctions against Russia because of Vladimir Putin’s war on Ukraine have pulled Japan in. She has war karma from 1939, when we also saw the lunar nodes move through Taurus and Scorpio. That karma is being repaid by Japan’s moral stance on Russia today, joining America and her allies against Putin. 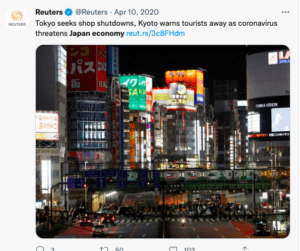 The nodes always show what is owed. When they rotate back to the zodiac signs they occupied in 1939, we expect to see settlement or balancing. That is now taking place.

There will be more shocks involving money laundering and not just Russia – other countries which abuse human rights will be called to account under The Magnitsky Act. So it’s a different world economy, not propped up by dirty money hidden in property development. That is also going to rock Japan.

The Pandemic and Japan to 2026

Despite the fantasising in April 2022, the pandemic, COVID-19, has not gone away either. Japan will respond to this virus, currently causing shutdowns in China, with one revolution after another, in lifestyle, finance and values. This Reuters post on Twitter from April 1oth 2020, shows Tokyo shutting down, and Kyoto warning tourists away.

This is part of a general world trend away from mass consumption, uncontrolled consumerism and unmanaged tourism. Japan is not alone. There are many countries who have these Taurus-Scorpio patterns; it is just that Japan will lead the way.

Japan and The New Local

I have been publishing a few predictions about The New Local, which will replace globalisation in one wave after another, starting in 2022. The zodiac sign which rules local life is Gemini. In 2022 we see a couple of unusual cycles in Gemini. Mercury Retrograde is followed by Mars Retrograde. Then we go to Jupiter in Gemini, and finally, the biggest change of all, Uranus (the revolution) in Gemini, after the year 2026.

Japan will begin a brand new relationship with her Asian neighbours from 2026. Gemini also rules cars, short journeys, commuting on public transport (Japan’s famous trains) and the local scene for tourists. Uranus rules new inventions. As Japan has strong Gemini patterns in both her astrology charts, 2026 is important. The solar symbol, or Rising Sun symbol (left, Unsplash) is a reminder that in both her 1947 and 1952 astrology charts, Japan has the Sun in Taurus. Taurus rules shopping. You are not going to stop the Japanese from shopping, but the new focus is local, homegrown and not imported – from 2026.

The Japan astrology chart set for 3rd May 1947 shows Uranus at 19 Gemini, so eventually she will experience her Uranus Return. That’s historic and it will directly concern her relationship with China, among others – as well as her car industry and her train network. We should add sea power, to that.

The Japan astrology chart set for 28th April 1952 shows the Moon at 28 Gemini. It will take a very long time for Uranus to reach 28 Gemini, but faster-moving planets like Jupiter will arrive there sooner.

None of this happens without disruption, dislocation and economic shock. Yet, Japan will rise again. In fact, her world-famous gift for producing new air-conditioning and heating technology will make sure she is at the very top of COVID-19.

Japan and the New Air-Conditioners

The astrology is clear. As variants continue to appear, and the injections of Pfizer, Moderna, AstraZeneca and the rest do not deliver what we want – it will be Japanese inventions (virus-zapping and virus-blocking air filtering, at affordable prices) which change the world. We will see new virus-filtered trains, cars and buses emerging; Japan will be the market leader. New banking, new cryptocurrency and ‘the new shopping’ will also appear as transiting Uranus goes to 24 Taurus, as Japan approaches the middle of the 2020’s, and opposes Jupiter at 24 Scorpio in the 1947 Japan astrology chart. Worth waiting for.