The Negative Personality Traits Of The Taurus Zodiac Sign, According To Astrology

Taurus is a fixed earth sign and is depicted as a bull. If you think about the bull as a metaphor, you will understand a lot about the Taurus zodiac sign. They are firm-footed, physically strong, and have great endurance.

At the same time, Taurus has negative personality traits.

Taurus is known to be slow and plodding, stubborn, and intimidatingly angry when provoked. Their ruling planet is Venus, the planet of the love goddess. The ethereal quality of the goddess might seem in stark contrast to the stocky bull, but it by no means a contradiction.

Although they are slow to open up at first, winning over the trust of a Taurus personality is always worth it in the end. They make highly reliable partners and friends, and will always be there for you when you are in need.

RELATED: 12 Facts About Taurus You Should Know (But Don’t), According To Astrology

But just as every flower has its thorns, every zodiac sign has its characteristic flaws. Any person that expresses their sign’s nature in negative ways is repressed in some way, either consciously or unconsciously, and would be wise to work on those tendencies which leave them frustrated.

It’s important to remember that focusing on positive qualities will help to resolve these negative personality traits. Additionally, becoming aware of the ways in which they might be imbalanced and avoiding them can help you become happier and functioning individuals.

Here are 5 negative Taurus personality traits that make them off-putting to other zodiac signs.

1. Taurus is very set in their ways.

It is very easy to be initially attracted to a Taurus. You’ll be drawn by their easy-going nature, hard-working values and sensual nature. Expect day trips to beautiful natural retreats with nights at 5-star hotels filled with fine dining and wine.

However, when the honeymoon ends, you may find the story is much different. A Taurus partner tends to get stuck in a rut in their committed relationships. Once they know they’ve got you, they tend to take you for granted.

A negative Taurus will plod into the living room after a hard day of work. They will grunt hello, plop down into the easy chair with a beer, and spend the rest of the evening watching TV. Don’t expect them to bring you flowers.

A negative Taurus tends to focus only on what they need at the end of the day. He/she still will expect dinner at 6 p.m. precisely. Taureans are very set in their ways and stick to a schedule. If anything or anyone tries to take them out of this routine, they will be very disgruntled.

Try suggesting ways to spice it up in the bedroom. But don’t be disappointed when your Taurus partner acts like they are not on board. Even though they are highly sexual creatures (this is one great way to get their attention, by the way), they are very uncomfortable with the unknown.

A Taurus tends to be very possessive of both their material goods and their partners. They tend to be very dependent in relationships, very jealous, and overly concerned with acquiring wealth in order to make their lives more comfortable.

People ruled by Taurus can often be very successful in their careers, but a negative Taurus will always prefer a reliable income over a hard-hitting and dynamic job.

They need the extra incentive to move up in the world. They also won’t quit a relationship, even way after it’s beyond its prime. Improving themselves must always involve some kind of material payoff.

In order to free themselves from attachment, Taurus should focus on ways to develop themselves spiritually, and embrace their natural creative and compassionate sides. 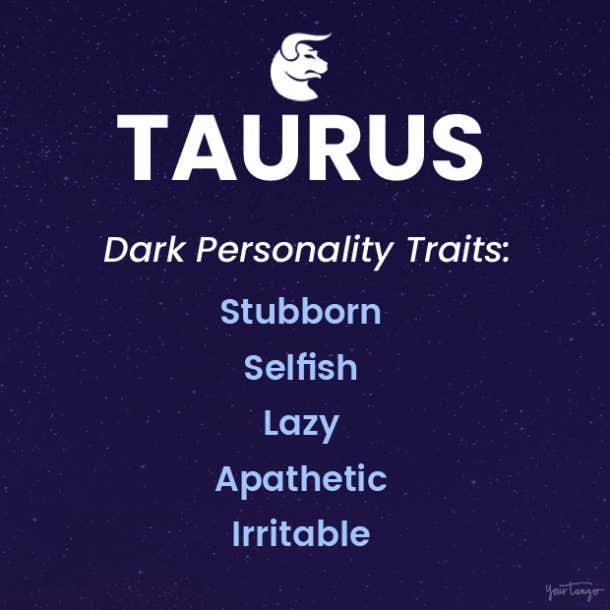 RELATED: Why Are Taurus So Difficult To Understand?

On a related note, Taureans have a love/hate relationship with food. Due to their already stocky nature and love of rich cuisine — such as meats, cheeses and alcohol — it’s very easy for Taurus to put on weight.

While known for their affinity towards physically engaging sports and hard work, their lazy side will make it hard for them to reach their ideal body image. And of this, they are painfully aware.

Due to their natural connection to their physical side, Taurus is quite the perfectionist when it comes to their image. But it doesn’t just end there. Even a less-than-attractive Taurus will expect their partner to be fit, firm and in manicured condition.

They will have no lack of diet, exercise and self-improvement advice for their friends and partners. Common phrases include: “Honey, have you ever considered getting breast implants?” or “Hey Roger, have you ever heard of this new penile implant technique?”

4. They are emotionally closed off.

An appropriate term for Taurus is emotionally constipated (maybe it’s all the meat and cheese). If you take them to a party, you can be sure they will look exceptionally dapper.

However, this earth sign will sit in the corner the whole time and not speak a word to anyone but you. In other words, don’t expect them to be the life of a party, but rather, as a nice table arrangement.

Taureans don’t open up to very many people right away and have few but close relationships.

5. Taurus can be irritable.

Just because they are so stolid faced doesn’t mean Taurus doesn’t feel. On the outside, a typical Taurus will appear good natured, easy-going and rather simple-minded. Within them, however, is a storehouse of complex repressed emotions and desires.

At times, these emotions come out in unexpected ways such as deep depressions or sudden bursts of anger, similar to the ram bashing into a wall. This is especially true if they are forced to be around people they don’t like, or are given instructions from an authority figure on what they should do.

Taureans definitely prefer being the boss. They are naturally dominant and will argue until they get their way. This is evident by the large percentage of the world’s dictators being Taureans. This includes: Adolf Hitler, Saddam Hussein, Vladimir Ilyich Lenin, and Catherine the Great.

Other infamous Taureans include Sid Vicious, the rambunctious and short-lived lead singer of the punk rock band The Sex Pistols; John Wilkes Booth, the man who assassinated Abraham Lincoln; and Albert Fish, the child serial killer.

RELATED: What It Means If You Were Born Under A Taurus Moon

Brianna Androff is a writer living in Minneapolis, Minnesota. She has a special interest in science writing, particularly within the field of Psychology. When not busy with work or research, she can be found in the garden with her two cats, attending concerts, or traveling.