The Jupiter and Neptune Conjunction

The Jupiter and Neptune Conjunction in Pisces

When two planets go to the same zodiac sign, at the same degree, in the same place – at the same time – it is such an historic event that astrologers flood the internet with predictions. This is about to happen to us on April 12th 2022. I am publishing this on March 30th so this rare event is a fortnight away. In this feature I will look at what it means for you, and also look at why Putin is more likely to end the Russia-Ukraine war near April 12th, than any other date.

Steven Forrest (the only astrologer to be endorsed by Sting) writes, at www.forrestastrology.com, “Jupiter and Neptune form a single perfect conjunction on April 12, 2022. The next one will not happen until March 2035.”

What happens in 2035, we don’t know. But we can assume it will have deep impact on Christianity, as April 2022 will. Jupiter and Neptune will both be in Pisces. Symbols of opportunity and religious belief, in the sign which rules Christianity.

Do You Have Pisces Factors?

If you have Pisces factors in the Twelfth House of your natal chart, then this Jupiter-Neptune conjunction in Pisces will be unforgettable. It will have spiritual, psychic or religious importance for you. Perhaps science will come into it. The Mind of God? What happens globally, but also personally, on April 9th, 10th, 11th, 12th is about your soul or spirit.

Do You Have Factors at 23 Degrees?

If you have factors at 23 degrees of any zodiac sign at all, then the story about that, in your birth horoscope, will be retold on April 9th, 10th, 11th, 12th, when we find Jupiter at 23 Pisces, Neptune at 23 Pisces, the True North Node at 23 Taurus and the True South Node at 23 Scorpio. The ‘what’ of the story depends on the zodiac sign, the house and the horoscope factor involved.

So, if you have the Moon at 23 Sagittarius in your Ninth House of foreigners, then your need to be needed (the Moon) by foreign people (Sagittarius) will come to life on April 9th-12th 2022. Here’s another example. If you have Mars at 23 Taurus, the money sign, then what happens on April 9th-12th will activate your need for instant action – financially.

In a moment I will look at Vladimir Putin, a deeply religious man, who wears a cross around his neck – and Russia – in the light of that. Are we going to see a miracle in this war on Ukraine?

The Mountain Astrologer is America’s most popular magazine in its field and claims, “This particular aspect in this particular sign hasn’t happened since 1856, when they came together on March 17th that year.” As everything in astrology is based on circular time (history repeating its themes) this gives us an excellent clue about Putin and Russia. Why? March 1856 was when Russia lost a religious war.

What does Jupiter conjunct Neptune mean?

What does it mean when Jupiter and Neptune are in conjunction? Let’s define terms with some great astrologers. A conjunction is easy. This aspect means both planets are connected. Together. Tied. They work rather like two children in a three-legged race, with their ankles knotted together.

Two Planets Tied Together is a Conjunction

You don’t get Jupiter without Neptune on April 12th 2022. And you don’t get Neptune without Jupiter. Incidentally, April 12th is the exact, perfect, precise conjunction day. The tied-together nature of Jupiter and Neptune actually takes place, in a looser way, on April 9th, 10th and 11th as well. 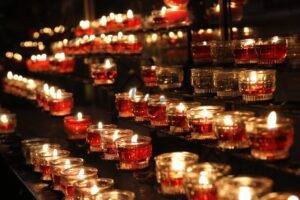 Throughout this period, both planets are at 23 degrees of Pisces, just as they are on April 12th, but with slightly less closeness. As most of the massive opportunities, huge solutions and tremendous luck of Jupiter tends to evolve over days, we can say that April 9th-12th 2022 is the period to watch. This photograph by Henk Van Der Steege (Unsplash) showing massed candles, gives you a sense of the atmosphere of the Jupiter and Neptune conjunction in Pisces. This feels like world religions, united. Of course, it can also be experienced outside the traditional church. If you are psychic, April 9th-12th may feel special.

Alan Leo on the Jupiter and Neptune Conjunction

By observing how a Jupiter-Neptune conjunction works in a birth chart, we can find out more about the transit in April 2022. Writing about the Jupiter-Neptune conjunction in The Key to Your Own Nativity (L.N.Fowler & Co. Ltd. 1969) Alan Leo suggests: “A strange and unusual influence which when prominent in a horoscope usually brings peculiar religious tendencies…Nevertheless the enthusiasm and breadth of view bestowed by this influence is in itself a splendid thing…”

Writing about Pisces in Down-To-Earth Astrology (Angus & Robertson, 1988) Stephanie Michaels comments, “Pisces is the Saviour, the redeemer of lost souls. The current Piscean age began with the best-known saviour of our times, Jesus Christ.

Are Russian Astrologers Behind the Ukraine War?

Does Vladimir Putin consult Russian astrologers? We don’t know this, any more than we know his time, place and date of birth. (His natal chart has a Rodden Rating of DD, or Dirty Data). 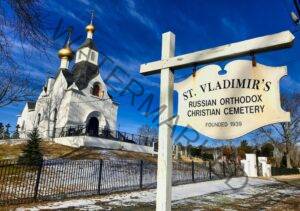 His timing for Russia’s war on Ukraine is uncanny. From an economic viewpoint, it is disastrous. (You can see a discussion about the Russia astrology chart and why the war such a mistake, here

Yet, if we look at the timing of Putin’s attack in 2022, there is an astrological line-up with 1856, the year The Crimean War ended. The year we last saw Neptune in conjunction with Jupiter in Pisces. The war over Crimea, in other words, has been continued by Vladimir Putin in exactly the same astrology cycle (and it’s extremely rare) that it finished last time. That’s intriguing. (Image: Gene Gallin, Unsplash).

In 1856, on the last Jupiter and Neptune conjunction in Pisces, Russia lost. She lost to France, the United Kingdom and their allies. It was a war fought over religion. The Russians were fighting for the Eastern Orthodox Church (of which Putin’s religion, the Russian Orthodox Church is part). The French were fighting for the Roman Catholic Church.

Happy Easter With Jupiter and Neptune?

Easter in the Russian Orthodox church is celebrated on April 17th, 2022. Just five days after the historic Jupiter-Neptune conjunction in Pisces. Patriarch Kirill, the head of the Russian Orthodox Church, has given Putin’s war on Ukraine his blessing. Why? Well, part of it is down to Gay Pride parades, as the Los Angeles Times reports here.

Nearly 300 Russian Orthodox priests in Russia signed an open letter appealing for peace. Let’s see who joins them, around the world, this Easter. More importantly, let’s see what God says on the Jupiter-Neptune conjunction in Pisces, on April 12th 2022. If ever there was astrological timing for a Christian miracle, a retreat by Russia and the end to this war, that’s it. Could events on April 9th, 10th, 11th, 12th end the Russia-Ukraine War?

Jupiter, Neptune and Your Natal Chart

You are only going to experience this rare, historic conjunction in a substantial way, if you have Pisces factors in your chart already, in the Twelfth House and/or if you have factors at 23 degrees of any zodiac sign. If so, use the flipbooks that come with membership, and also The Garden Oracle, The Astrology Oracle and the Smith-Waite Tarot. This will show you an intensely personal take on how this wonderful conjunction will time your life for you.

The Jupiter-Neptune conjunction in Pisces is rare and only lasts for four days. The cycle of both planets as a whole (in Pisces) started earlier and goes on longer, until Christmas 2022. You can find out more here, in a prediction I filed a long time ago –  and how it affects your Sun sign. My YouTube interview about Jupiter and Neptune in Pisces at The Conscious Café is here.