What It Means If You Were Born Under An Aries Moon

Many of us are aware of our Sun sign, also known as our zodiac sign, or even our “big three,” which refers to our Sun, Moon, and Rising signs in our natal chart.

But our Moon sign is just as important in learning the hidden meaning of why we act and love the way we do. Such is the case with the Aries Moon placement.

By knowing these secrets, we not only use them to our advantage, but we’re also aware of what we might need to adjust or reflect on — not only to be the people we want to be, but to live the lives we desire.

What Does It Mean To Be An Aries Moon?

So, our Moon sign, according to our birth chart, is simply the sign that the Moon was in at the time of our birth. But in astrology, these two mean very different things.

Our Sun sign represents and describes our ego or external self — how we move within the world and how we appear to others (even if that’s not who we truly are). Like the quote says, “The Sun sees our body while the Moon sees our soul.”

Our Moon sign represents who we truly are. Our Moon sign defines the self we are when no one else is around, but it also signifies our emotional world, or the part of us that makes up our truth.

If Aries is your Moon sign, that means the Moon was traveling through the sign of Aries when you were born.

RELATED: How To Use The Phases Of The Moon To Manifest Your Desires & Dreams

Aries Moons have very strong personalities, so it’s no surprise that they are so independent and free-spirited. Aries is also a cardinal sign, meaning they are an initiator of change and have unique leadership qualities.

Aries Moons are individuals who set the example for others to follow. Whether it’s in their attitude, ambition, or even their fashion sense, they are all about doing their own thing and standing out from the crowd. And because they are so confident, it’s easy for them to trailblaze.

At every turn, Aries Moon sees an opportunity to chase success, and the challenges and setbacks just make that journey more interesting to them. If they have an idea, they will see it through to the end, using their passionate nature to help it grow.

Due to their self-determination, Aries Moon tends to be a bit eager and impatient, and can often make themselves frustrated if their ideas don’t come to fruition. Aries Moon’s fierce independence creates a place of power, but also a quality they have to be mindful of because it can lead to self-isolation.

Aries is the first sign in astrology and is a fire sign, which means there is a lot of ambition and drive associated with this sign.

This fire sign was the God of War, which means that having a secret temper or even feisty streak is usually part of this Moon’s personality traits. However, Aries Moon doesn’t get mad for no reason.

They likely get angry because they feel that their freedom and independence is being compromised, or they are being held back, resulting in them unable to be themselves.

A deep need to blaze their own trail is part of the dynamic of the Aries Moon, meaning this is a sign that minds receiving external validation from others, telling them they’re on the right track or doing a good job.

To moderate their fierce energy in a healthy way, it’s beneficial for Aries Moon to be involved in something where leadership and take-charge attitude can have a positive outlet.

Whether through a career, social activities, or even in their downtime, feeling like they have control over their lives is important.

If Aries Moon can feel in control or in charge, they are less likely to take that stance in relationships. If they feel understood by those close to them, they are more likely to have an open mind with others.

While the Aries Moon sign has an extreme motivation to move forward and act in their lives, they do have to be wary of being impulsive and not clearly thinking everything through beforehand.

This doesn’t mean they are wrong for what direction they want to take in their lives, only that it’s always of benefit to think on it before actually deciding. 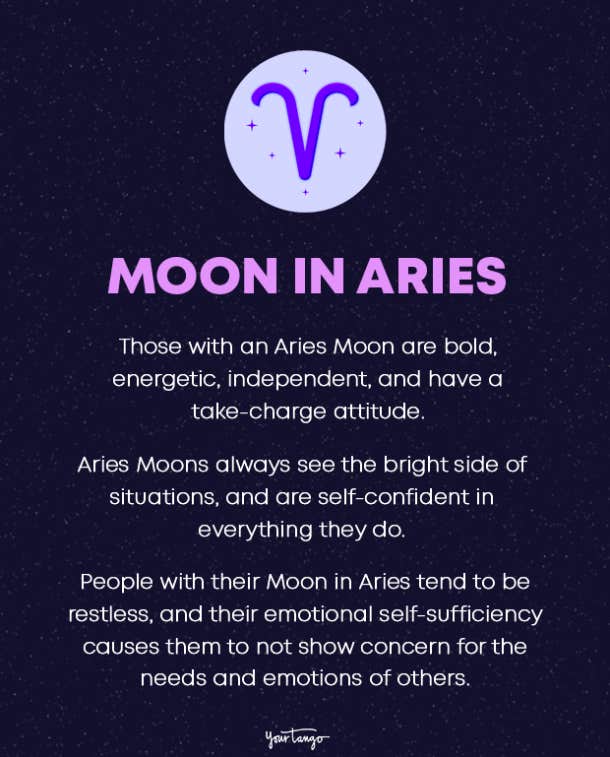 Aries Moon has an excellent sense of business and usually tends to be good with money, although they do have to be watchful of overspending on a whim.

They tend to be drawn to executive or managerial roles, and are great at delegating projects and getting things done. They like a challenge and will be drawn to new projects or last-ditch efforts, even accomplishing the impossible.

And watch out if you tell an Aries Moon they can’t do something, because it’s entirely likely they’ll end up doing just that, except better!

If not drawn to a supervisor position, Aries Moons also do great being self-employed or starting their own business. This is because they are able to break down big projects into more manageable tasks, and not give up until their goal has been accomplished.

Rarely does this sign give up because something feels too difficult or because it will take too long; if anything, that’s only more fuel for their ambitious fires.

Aries Moon in love gets what they want — period. However, it’s often through gifts or sex rather than emotions.

If this sign is with a partner that understands they express themselves best physically, it’s likely they will have a long and successful partnership. If they are with a more emotionally needy Moon sign, it’s a problematic area that might end up being responsible for splitting them up.

Known more for their logic and action rather than sentiment, this isn’t a Moon sign that dishes out romance in large bundles, even if they secretly feel inclined to do so.

This Moon sign doesn’t do anything halfway, and for the partner who prefers actions to talk, they will mesh perfectly.

Even with the potential for difficulties, this is one of the more passionate Moon signs. For the partner that is attracted to their high energy and ambition towards living an amazing life, they will never be able to get enough.

Two Aries Moons together is a relationship built on emotional self-sufficiency, competitiveness, and assertiveness. Aries Moons are take-charge, which could lead to issues if neither partner is willing to compromise.

Because of the strong influence of their fire element, two Aries Moons could be unwilling to offer emotional support, or relent to the wishes of their partner.

Aries Moon and Taurus Moon greatly differ in their views of stability, and the way in which they express themselves. While Taurus Moon craves security, Aries Moon is impatient and free-spirited, willing to change if a new opportunity comes their way.

Taurus Moon has a way of calming down Aries Moon’s anger, but overall, a relationship between the two is a bit paradoxical to work.

Fiery Aries Moon with air sign Gemini totally click in most areas, particularly their preference for change, action, and ambition. Gemini Moon complements Aries Moon’s views of emotional expression, with neither sign relying on self-expression to solve their problems.

With the way Cancer Moon is so deeply emotional, there are bound to be conflicts with Aries Moon, who is emotionally self-sufficient. Cancer Moon also craves security and comfort, while Aries Moons are all about their independence.

Aries Moon’s impatience and confrontational attitude will rub sensitive Cancer Moon the wrong way. And if a relationship is to work, there are a lot of changes that need to be made first.

Fiery Aries Moon is a great match for Leo Moon, as they share many of the same interests, strengths, and ambitions. Both Leo Moon and Aries Moon are independent and enjoy being pioneers in new projects or ideas.

Aries Moon actually ends up challenging Leo Moon, who could use some stimulation from time to time when stuck in a rut of laziness.

Overly analytical Virgo Moon and impulsive Aries Moon aren’t quite a good match, as either friends or lovers. They have very different ways of expressing their emotions, which will lead to tense situations.

Despite their tough exterior, Virgo Moons are sensitive and may be unnerved by Aries Moon’s bold and direct nature. A relationship between the two could go sour quickly, especially considering Virgo Moon’s critical nature bringing Aries Moon down a few notches.

Though they are opposites, Libra Moon and Aries Moon complement each other nicely. Libra Moon is diplomatic by nature and can easily go with the flow when it comes to Aries Moon’s need to be in control.

Libra Moon craves a connection, while Aries Moon is independent, and while going along with Aries Moon may satisfy them for a bit, eventually, Libra Moon will feel emotionally unfulfilled in their relationship.

The way that Aries Moon and Scorpio Moon express their emotions will cause major turmoil in a match between them. While Aries Moon will have a blowout and move on, Scorpio Moon holds their feelings, creating resentment and negative feelings.

While they may have conflicts about their feelings, both of these Moon signs are passionate and have a chance at creating a good relationship if they are willing to compromise.

Both fire signs, Aries Moon and Sagittarius Moon crave adventure, stimulation, freedom and independence. Each prefers change to stagnation, and their relationship is full of excitement.

Aries Moon and Sagittarius Moon have the highest compatibility of all the Moon signs, making for quite a harmonious bond.

Aries Moon and Capricorn Moon are just not a great match. And this is mainly because Capricorn is an earth sign and, as such, is slow and careful; whereas Aries is impulsive and quick-moving.

Aries Moon can help Capricorn Moon be more spontaneous and step out of their comfort zone, and Capricorn Moon will find comfort in Aries Moon’s approach to emotions. However, this pair tends to clash too frequently to have a stable relationship.

Both Aries Moon and Aquarius Moon are deep intellectuals and have a strong desire to try new things. They have similar dispositions, but sometimes clash because Aquarius Moon is diplomatic and detached in their emotions, while Aries Moon’s are red hot.

In a relationship, Aries Moon and Aquarius Moon share a mutual respect of the other’s independence and freedom, but complement one another’s desire to move forward.

Deeply emotional, gentle, intuitive and sensitive Pisces Moon cannot stand Aries Moon’s brash and confrontational ways! With drastically different emotional needs, there will no doubt be conflict in a relationship.

Kate Rose is an artist, writer, passionate yogi, spiritual astrologist, relationship and life coach, and motivational speaker. As a spiritual intuitive, she practices the religion of astrology and love. For more of her work, visit her website.