The 4 Cardinal Signs Of Astrology & Their Meanings Explained

In astrology, each of the 12 zodiac signs falls under one of three astrological qualities, also called modalities: cardinal, fixed, and mutable.

But each cardinal sign also belongs to a season: spring, summer, fall and winter. Aries is spring, Cancer is summer, Libra is fall, and Capricorn is winter.

In contrast to fixed and mutable zodiac signs, each cardinal sign is an initiator of change, possessing unique leadership traits.

These signs love having a vision and creating plans with set goals that achieve those dreams. As initiators, they tend to influence other signs of the Zodiac, even if their power is more understated; this is especially true in the emotional sense.

RELATED: What Planet Rules Each Of The Zodiac Signs & Their Meaning, Per Astrology

Cardinal signs’ leadership qualities include having a passionate fierceness, competitive edge, and control over their external environment. They are known to value order, although this tendency manifests differently based on the influence of their associated astrological elements.

For example, Aries excels in competition, whereas Cancer loves hosting others for dinner; Capricorn tends to be more old-fashioned in their ways, while Libra is often a peacemaker concerned with matters of social justice.

The cardinal signs make for highly-determined individuals, as they are the initiators of the modalities. They start an action or come up with plans to achieve long-term goals.

Their ambitious tendencies mean they push forward and take every opportunity as it comes. They can easily overcome obstacles, must have a goal to feel like they are on the right track, and tend to be overachievers.

While cardinal signs are surprisingly emotional and, some would say, even moody, that’s because they are prone to express their feelings, a sign of emotional intelligence.

People who are emotionally intelligent are described as motivated, empathetic, and self-aware. They recognize their emotions, rather than suppressing them, and use them to guide their thinking and actions. This also makes it easier for them to achieve their goals.

Because they are such strong leaders in many areas of life, cardinal signs tend to be social and outgoing. They are the first to try something new, set trends, and get others into party mode.

After getting to know them, it becomes apparent that they are people-oriented and take control. This means that to accomplish tasks, they do best when they surround themselves with others.

These are the zodiac signs that initiate the most, whether that means jumping straight into a new action like Aries, or developing long-term plans like Cancer and Capricorn. They then adhere to these plans and actions, and analyze them from all angles (especially Libra).

This is all in an effort to accomplish their goals and, usually, they involve their loved ones in their plans for a more fulfilling life.

Because the cardinal signs are around people so often, they can become emotional sponges. Sometimes this has the unfortunate effect of shaping their views more negatively as they remember past grievances and hold onto grudges.

While they don’t mean to do this, they’re just emotional people who tend to be in tune with others. To become more well-rounded and less susceptible to the negativity of others, they’d do best to learn how to let go of and not become overwhelmed by life issues. 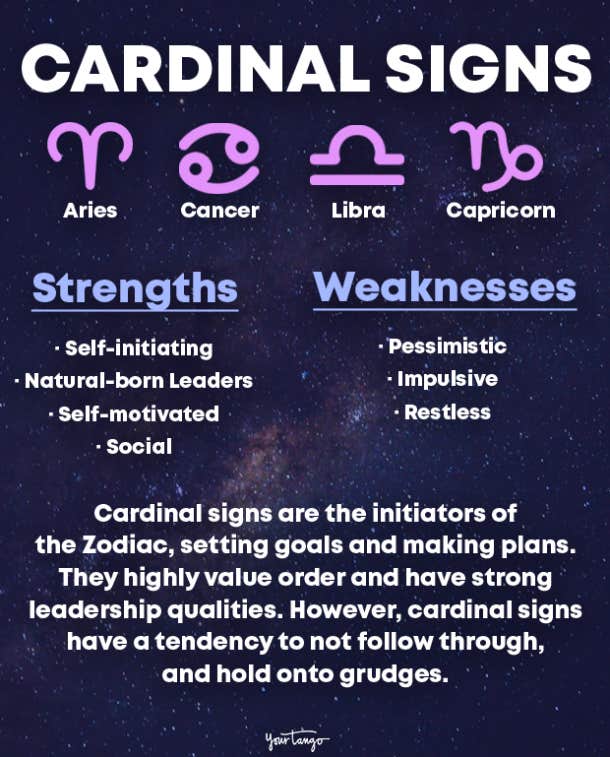 Differences Between The Cardinal Signs

As mentioned, each of the four cardinal signs is associated with a different element and season. So, although they have much in common, they also differ in some specific areas.

Aries is an aggressive sign who takes a direct approach. They are impulsive, jump straight into new action, and are prone to displaying anger. Though they compete in friendly competition, they are quick to anger at the thought of others cheating.

Because of their love for challenges, they enjoy being around others who have the same level of competitiveness. These like-minded people give Aries a way to attain improvement in their own lives.

As a fire sign, Aries is an “agitator,” meaning they set actions and plans in motion. This shows others how strong they are at delegating and leading, but their powerful nature and commitment to following through can affect others negatively.

Cancer meets challenging situations by sentiment, sensing the energy in their environments and coming up with long-term plans, opposite to Aries’ aggressive approach. Cancer will often retreat into their inner self to feel their way through a situation.

This cardinal sign is soft, and it shows through their care for their homes, art, and family. As the homemaker of the Zodiac, they enjoy the idea of having a relationship, children, and a close circle of friends. They are the type of people who take care of others.

As a water sign, Cancer puts their emotion into everything they do. By using their feelings and heart to achieve their goals and tend to the needs of others, they are able to push forward with ease. However, using emotions this way can also come off as controlling or devious.

Want to know what’s in store for your zodiac sign? Sign up for our free newsletter & get your personal horoscope straight to your inbox daily!

To achieve their goals of having a just world, Libras are highly intelligent and use that quality to hear all sides of a story. A natural empath, they resolve problems with emotional intelligence. Their vision for the world means using a sympathetic approach.

This cardinal sign always finds themselves in social situations where they can impart their advice or give perspective on justice — it’s part of their essence to serve, as they are the “idea” people of the Zodiac. They take plans and analyze them from all angles, all to accomplish their ambitions.

As an air sign, Libra brings balance to situations with their critical thinking skills and creativity. They are charismatic and focus on justice, but the force they use can sometimes be considered dangerous, as they may disregard the needs of some for the benefit of others.

Capricorns might progress slowly and steadily, but they love routine and creating long-term plans.

Because of this need for routine and tradition, they become highly irritable when these traditions are disturbed. Their strategic thinking makes Capricorn believe everything should meet their individual standards.

Capricorn loves their family, which is part of the reason why they love traditions; they need to enlist family in helping pass down their beloved traditions. And though they have a reputation for being harsh, they are deeply emotional and sensitive.

As earth signs, Capricorns are grounded and reliable. One of the hardest working zodiac signs, they are diligent about achieving their goals and plans; however, these qualities can come off as ruthless and callous.

Being a cardinal sign — Aries, Cancer, Libra and Capricorn — means you approach your work life and romantic life with control, balance, and initiating positive change.

This makes you a leader at work, using energy and originality to push forward and meet goals. But this can also be perceived as controlling and rude.

In relationships, you strive to have balance between you and your partner, and take on a more dominant role. For this reason, it’s best to have a romantic relationship with either a fixed or mutable sign, as two cardinal signs together calls for major control issues.

The modalities in astrology are based off of your Sun sign, but remember that this is only one aspect of your natal chart. Your full birth chart is a complex combination of where the planets were at your time of birth, and includes much more than your Sun sign (also known as your zodiac sign).

For a more in-depth, detailed description of your personality, consider getting an astrological reading or full natal chart.

Camila Isopo Novi is a fiction writer and journalist living in Chicago, Illinois. She’s written and edited for online magazines, with a focus on astrology, relationships, and trending topics.