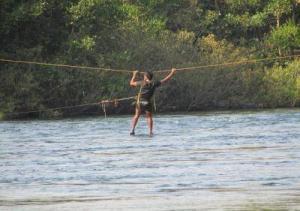 Taking all of astrology into consideration, I am most interested in oppositions. This may be because of the tension they create.

It may be projection or what you can learn looking into a kind of backwards mirror. It may simply be how you can see them play in relationships or how you need a relationship to see them play.

I don’t have any oppositions in my chart but this isn’t really true. Every point in every chart has an opposite point.

As I mentioned on my full moon post, I’m seeing something I’ve never seen before in my life.  I see people compelled to leave their comfort zone… they are basically heading to their opposite shore.  You know. The shore they’ve avoided all their life?

As (some) people get older, they see they have much to learn from the opposite sign.  So this does happen.  But the magnitude of current flip-flopping is truly unprecedented.

You see that guy in the picture. It’s symbolic.  What if all the planets in his chart are in the private, more self-centered houses. Imagine he’s sick of it.  He doesn’t want to live the life he seems to have been assigned. That’s him crossing to the other side, never to return.  It’s takes a lot of balls.  You need courage.

So I’m seeing this happen with legions of people and I think the astrology can explain why.

First, Pluto went into Capricorn. I told you there were cracks in the foundation.  I got called “morose” and much worse. How do you like the rubble, fifteen years later?

Neptune in Pisces has left many disillusioned, confused and half-crazy in disbelief.

Now Saturn squaring Uranus in the Fixed signs is upsetting things that have seemed immovable for centuries.

Here’s what kills me. It won’t be long before Pluto ingresses into Aquarius, a Fixed sign. ::nervous laughter::

To sum this up, there are a lot of people out there who just don’t want to be who they are or what they are. They want to cross over and literally flush the things they used to think mattered so that they may travel lighter.

With Saturn squaring Uranus, you may have to move slowly and carefully but outside of that, this is a truly a great time to permanently change your life. The future is real.

Here’s my favorite river crossing song.  Maybe it will inspire you.

Can you relate to this at all?