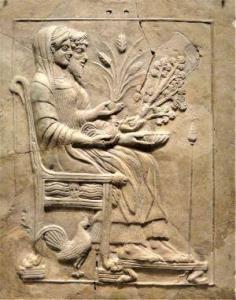 As Venus continues her dance with Pluto in Capricorn, I think it’s time to revisit the old story of Hades and Persephone. I wrote about this here: Are Venus Pluto Contacts In Synastry Problematic?

The central theme is that Venus is nowhere near as powerless as we may think, even in Pluto’s grasp. In fact, she may be more powerful than we had imagined.

In ancient Mycenae, the civilization that was the precursor to classical Greece, Persephone was more than a spring maiden kidnapped by the big bad wolf. She was no victim. In fact, she herself was the Queen of the Underworld, and the sole sovereign. Hades wasn’t introduced into the myth until centuries later. But even then, it was a long time before Hades took on his role as the ruler of the dead. This is even seen in the picture above, which shows Persephone and Hades sitting together on their throne. Persephone is sitting in front of Hades, indicating that she is the more important and powerful figure.

Venus, in her subterranean, retrograde, Pluto-influenced form, is one who renews life. She brings us down to the land of the dead to rest, recover, and review our lives and loves. She helps us integrate the experiences of being alive, of being in a body, and of loving others. And when we’ve completed this process, she turns direct and restores us to life, becoming the beautiful light of spring we know and love.

Venus is the queen of both darkness and light. Because of this, it is she who leads us out of the underworld and into the land of the living. And her arts are the way we heal from the ravages of Pluto.

It’s Venus that helps us recall the miracle of being both a body and a soul at once. She helps us be physically present, delighting our senses with the smell of roses or the sweetness of honey. It’s Venus that reminds us that the world is bursting with pleasure, and we are meant to revel in it.

Venus also tells us that the only way any of us thrive is if we all do. She tells us that the only thing we really need is each other. She is the principle that unites us. She is one who screams out that loneliness can literally shorten our lives while having friends and loved ones near us can keep us going for years.

So in these times when Venus is retrograde and Pluto is pulling us down, lean on Venus to help you listen to your body and your heart, and rest. And when she turns direct once again, breezing past Pluto on her way to greener pastures, let her help you find joy again.

How are you feeling during this Venus retrograde? Do you think Venus can master Pluto?