The Astrology of Anthony Albanese

Anthony Albanese, a March-born Pisces, is typical of his sign. He is intuitive – I would bet psychic – and is tuning into the future of  Australian cars and trains. Or is the future tuning into him? As we’ll see in a moment, right from adolescence, the true Pisces has X-ray vision for the future. Albanese also has the Moon in Gemini.

We are heading into Gemini cycles for many years to come, and Gemini rules public transport and domestic travel. What is coming to Australia in stages, from 2022, transforms the nation. She’s a big country, but this rolling Gemini weather is very much about shrinking the distance in exciting new ways. So let’s talk about this Gemini Moon Man. 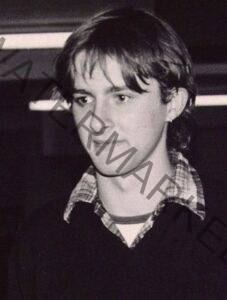 Cometh the cycle, cometh the politician.  The typical Gemini Moon male (left, Albanese as a youngster) is fast, bright, switched-on and a born debater. Pisces Sun and Gemini Moon people tend to be so far ahead of the game with the media, they cherrypick the words.

Gemini is also the ‘vroom vroom Moon’ and they’re all mad about the latest and greatest in cars. In 2022 this happens to be Tesla.

Anthony Albanese was behind Melbourne’s Regional Rail Link, the Hunter Expressway, the Gold Coast light rail system and the (very Australian) Bruce Highway in Queensland. So he’s a classic Gemini Moon man, with strong Pisces Sun instincts about commuting and local tourism in the Twenties and Thirties. He is already tapping Ceres and Mars Retrograde in Gemini in 2022 (the start of the big push for electric cars and bikes in Australia, along with more appealing local trains). This is just the start.  He is also tuning into the continued Mars transit in Gemini in early 2023, and beyond that – the big one – Jupiter in Gemini, followed by the real renewable energy car revolution. – Uranus in Gemini.

Albanese has certainly made his Labor party the home of tax breaks to electric car sales.

You get the feeling that there is a genuine passion there for connecting Australia across the states, and within states, in a 21st century way; that’s certainly what the chart shows. But will Sydney and Newcastle agree? Is the promised Labor $500 million fast rail enough?

The possible future Prime Minister of Australia was born on 2nd March 1963 in Camperdown, Sydney, Australia. We do not have a time so use a 12.00pm noon time instead. This is one reason why you can’t predict a winner. Whenever anyone takes power, he or she has a career peak, but also moves house. That is a matter for the MC or Midheaven and IC or Immum Coeli. These depend on accurate clock timing when the child is born. Very, very few politicians have it. So we use 12 noon which is mostly accurate for the chart in general, but it means we can’t call a big win/removal truck.

Albanese has the Moon in Gemini. His Saturn Return in Aquarius (the group – obviously the Labor party) due February 6th to 9th 2022. He’s a proper Labor leader, Aquarius being the sign of equality, community and diversity. He has Bacchus at 8 Aquarius, Saturn at 16 Aquarius (mentioned above), Fortuna at 23 Aquarius, Mercury at 19 Aquarius, Minerva at 12 Aquarius and so has an Aquarius stellium. The Labor leader has his Saturn Return at 16 Aquarius in 2022, but also his Jupiter Return at 22 Pisces, which is highly unusual. The planets of heavy responsibility and great obstacles – and huge opportunities and breakthroughs. The former happens about every 28 years, the latter about every 12 years, so 2022 is extremely rare for him.

Mercury at 19 Aquarius in the Albanese chart is about television, high-speed broadband, fast trains, electric cars and bikes – and whatever the future brings in terms of media, commuting, connection and communication. Mercury is the messenger. Here we find Mercury exactly in aspect to Salacia at 19 Capricorn, the sign of the top 1% in power. I find that fascinating because Labor has pledged to restore funding to the ABC and SBS upon victory. They also promise to expand full-fibre access to an extra 1.5 million homes or offices on the National Broadband Network. These are Mercury/Gemini matters. 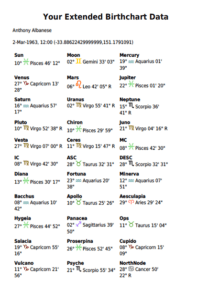 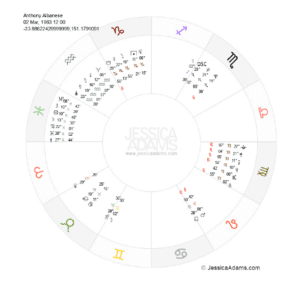 In 1951, some 12 years before Anthony Albanese was even born, the master astrologer Margaret Hone D.F.Astrol.S published The Modern Text Book of Astrology (L.N.Fowler & Co. Ltd. Romford) and wrote this about Gemini.

In 2022, election year, we find two unusual astrology cycles which begin years of Gemini weather. Ceres is in Gemini from February 10th until May 15th, which is the election period to expect. Mars is Retrograde in Gemini from August 21st until March 25th 2023. We then go to Jupiter in Gemini from May 26th 2024 until June 9th 2025. Then, the history-changing cycle for Australia in terms of all the above matters: Uranus in Gemini from July 8th 2025 until May 22nd 2033. That sounds like a long-term political project: the conversion of Australia from being a country dependent on foreign tourism, as she clearly is in 2022 (even in a time of COVID-19) to a nation which is all about interstate and intercity travel – 21st century style. It’s very much the same with schools and universities, television and internet, which Gemini rules. Australia is going very hi-tech.

I don’t predict election results any more. In very tight races in countries where people can also choose not to turn up to vote, it can be genuinely dangerous for an astrologer with millions of website hits to call an outcome. That’s honestly a lot of us – astrology is hugely popular, as my colleague Susan Miller proves – and I never want to be the person who predicts a winner in a two-horse race, so that some might stay home and not vote, because “astrology said she/he’s going to win anyway.”

The other problem is flawed data. Donald Trump is the most famous example of that, managing to give the authorities not just one but two birthdays. Albanese is far more trustworthy than Trump – obviously – but predicting outcomes is dicey unless you have AA data, and we just don’t.

What we can do in an election, which is far more interesting, is look at what’s coming into Australia in 2022, 2023, 2024 and beyond. I’ve been talking about The New Local for a while. This is going to be a plugged-in country, going away from global tourism, and towards the domestic scene – possibly with New Zealand on board.

The trains (above all, the trains) will be part of the most exciting new interstate network. Radio Birdman fan Albanese (below) is equally plugged into that, according to not only his chart, but also his policy sell for the 2022 election. So that’s crucial. 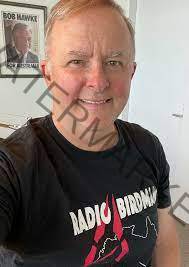 The Last of the Sagittarius Weather

The last of the Sagittarius weather vanishes on January 19th 2022, with the South Node leaving that sign. That is the last of the serious opposition to the growing Gemini wave which appears from 2022 and runs for many years, dominating the Australian chart.

Sagittarius rules foreigners and foreign countries – international flights – globalisation and tourism. This is where COVID-19 comes from. First China, then India (Delta) and most recently Omicron (South Africa). It’s been disastrous for the local economy of so many places, including Hobart, where I am writing this now. There is a new push coming towards local.

Gemini Is About Sydney-Melbourne

Gemini is not so much about Perth-Bali as it is about Perth-Adelaide. It’s really about Sydney-Newcastle and Hobart-Launceston. It is also about Sydney-Melbourne and above all Sydney-Auckland. Is there hope for bridge-and-bubble travel? 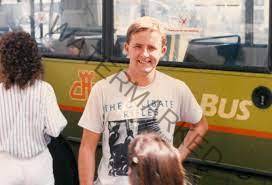 The Gemini weather, in rolling waves from 2022, says this is actually the future. And once Jupiter goes into Gemini it booms. Jupiter is just two or three cycles away now.

There is something about this Albanese natal chart (we lack a time so we can only generalise) that suggests a solar-powered VW van with a surfboard on the top. If the man wasn’t leading Labor, he’d be head of some vast Australian travel and transportation company specialising in renewables.

This is a switched-on creature in politics, quite unusual for these times and not your average bear. This is the chart of someone who is wildly and genuinely interested in the cutting edge of technology. I rather like this old photograph here (no credit, but widely viral on Twitter) which shows Albanese as a young Celibate Rifles fan, giving an old-fashioned bus the elbow. The new Australia will make the old buses look like museum pieces. So perhaps this really is a future PM elbowing the old petrol buses out of the way.

The other fascinating thing about what I think is a naturally psychic Labor leader (Pisces men tend to tune into the zeitgeist better than most, hence Albanese’s obsession with trains, when everyone else is talking about Covid disasters) is his stance on equal marriage.

His support of LGBT rights and his frequent appearances at the Sydney Gay and Lesbian Mardi Gras is an absolute winner with Generation Libra so that’s another instinct for the votes. (Born with Uranus or Pluto in Libra, these generations are behind the marriage equality vote in Australia. And boy, do they love to vote).

This generation born with Pluto or Uranus in Libra (equality)  are about feminism as well. Albanese pointedly has strong women to his left and right in Labor. Julia Gillard was his own Prime Minister. Uranus and Pluto in Libra people come into their own in these waves of Gemini transits, all making stunning trines to their charts – which are about equality. Albanese is a fan of The Smiths. This feels like a fated change in the nation. Uranus in Gemini and Pluto in Aquarius both trine the natal Uranus and Pluto positions of entire generations in the future. The equality generations.

Given where Australia is going after Uranus changes to Gemini from 2026, and the most exciting, radical change in transport and travel since the 1940s arrives (back then it was the Jeep and the Lambretta, on the last Uranus in Gemini cycle) you’d have to say, Albanese has wheels. Probably solar-powered. Will it get him and Labor into power? What do you think?

Twitter is always the best source for unique photographs.