How a Chinese Astrology Chart From 1912 Shows the Future

I’ve looked at China a couple of times in recent years, using the chart set for 1st January 1912 in Nanking, at 12.00 noon (in the absence of a ‘birth’ time for the arrival of the Republic of China under Sun Yat-sen).  So how does it look with Evergrande? 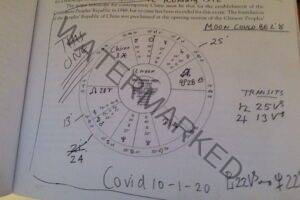 I used this chart to predict ‘a virus’ on 10th January 2020 which would bring about a change in the world order involving China. This is the original page from my trusty bible, The Book of World Horoscopes by Nicholas Campion (The Wessex Astrologer, 2004). There are a few charts for China but when I scrawled THIS ONE it was based on the start of what we would come to know as COVID-19. So, what does it tell us about Evergrande and the end of communism?

You always glance at Taurus and Scorpio in any national chart to see where the economy is at. Here we have a perfect storm. Karma from the Second World War is coming back. So is economic shock and revolution, years into the future. This is freedom, independence and radical change for people in China, but also the end of Made in China. I hope you can see now where the supply shortages and rationing of 2022, 2023 is coming from. I was just recording a podcast about this yesterday.

The End of Communism

This prediction (The End of Communism in China, see earlier post) dates from 2018, so a couple of years before the Wuhan Corona Virus, and four years before the news that Evergrande shares had been suspended. Using Mercury Retrograde cycles in 2022, it’s possible to see when this suspension will become critical, not just for China, but the world economy, because of course – we are all exposed to their money.

In the very short term, before I look at the massive changes in 2023, we need to pick up Mercury Retrograde at 28 Capricorn, right on Uranus at 28 Capricorn, in the China horoscope. This symbol of suspension, chaos, delay, flux landed here on 1st January 2022, when the Evergrande crisis deepened. Watch the next backward pass on Thursday 27th January 2022 and the final one, Sunday 13th February 2022. This is a classic sign of market turmoil and it is going to pull in Chinese leadership.

I’ll say this a couple of times in this feature, but astrologers ignore Ceres at their peril. She always shows a change in the balance of power, politically and on the markets, and she turns up at the same 28 degree pattern, in Taurus (the world economy) from December 29th 2021 until February 1st 2022. Ceres always means a new deal. An agreement to differ. This is a picture of world sharemarkets in turmoil, because we not only have Mercury Retrograde (notorious for this) but also Ceres Retrograde.

Aquarius rules Communism. It is the sign of diversity, community and equality. That is the ideal. The reality is often different. The Mao Long March on October 21st 1934 shows us Saturn at 21 Aquarius. Saturn goes to 21 Aquarius again on March 22nd 2022 and stays there until March 31st.

This is a perfect square to the Moon at 21 Taurus, the economy sign, in the chart for China set for 1st January 1912 (above). China cannot square the grim reality of Communism (Saturn in Aquarius) against her ‘need to feed’ economically. That’s going to be a global problem.

How does Evergrande show up? And the entire Chinese property market? Well, Neptune (fantasies) is at 22 Cancer (real estate, high-rise, property developers) in the chart above, too. It is really close to an exact aspect to the Moon, and thus to transiting Saturn. We could allow a window for China sharemarket crisis, then, from March 22nd until April 12th, 2022 – if we are going to pull in Neptune as well as the Moon. Spreadsheets in the sky and China’s stake in foreign countries are in real doubt then. 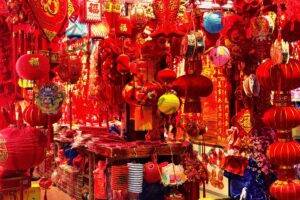 Because the lunar nodes (karma) are in the economy signs (Taurus and Scorpio) in 2022 and 2023, we are being taken right back to the 1930’s and China, along with Japan, has karma to face.

On that day, the True North Node was at 22 Capricorn and True South Node at 22 Cancer. Again, Cancer – which rules real-estate. Capricorn, of course, always rules the men at the top. Japan is tied to the end of Communism that is coming.

This is what remains of the old ideology of Mao Tse-tung. The Red Flag. Why? Japan and China both owe each other and this will be repaid as the transiting nodes go to 22 Taurus and Scorpio. (Image Zhang-Kaiyv, Unsplash.)

That is really close to the March date I singled out as a crisis for the Chinese sharemarket. We’re talking April 3rd until June 18th 2022. Again, we have to look at Tokyo. The Japanese invasion – the Japan occupation. On August 29th 1937 Japanese bombers ‘shattered’ Shanghai. British women and children were evacuated on a P&O liner. The Union Jack is now pulled in.

Australia is also pulled in, because on June 1st 1938, Australia banned exports of iron ore to Japan. The Prime Minister at the time, Joseph Lyons, upset the Japanese because they had invested in iron ore in Western Australia. The karma goes on.

The Japan ten-year deal with Germany and Italy on September 27th 1940 pulled her into lifelong karma with those two countries, but also the allies – the United Kingdom, the United States, Canada, Australia, New Zealand and most of Europe.

We are now deeply into the complex chain of ‘money owed, lives owed’ and it’s coming around again in 2022 and 2023. In fact, Japan signed her pact with Nazi Germany and Fascist Italy on September 27th 1940 when Uranus was at 25 Taurus (making history, Uranus is back in Taurus now) and the True North Node was at 11 Libra, the sign of partnerships and the True South Node was at 11 Aries, the sign of war.

In June 2024 we will find Japan, Italy and Germany paying their karmic dues to the United States and most of Europe. This is an historic repeat. Trade deals.

Evergrande as a Jupiter Symbol

Evergrande is a Jupiter word. Jupiter is ‘grand’ and anything outsized, large, impressive. Ever suggests ‘forever’ but there is nothing permanent about Jupiter in the China cart. She was born on 1st January 1912 with Jupiter at 4 Sagittarius, the sign of foreigners and foreign countries. That is where she expands and grows.

So, Evergrande has a large foreign stake. But this is not a particularly lucky Jupiter. Nothing picks it up in the China chart. My colleague, the financial astrologer Kate Silas, picked up eclipse patterns in Sagittarius, connected to Evergrande, on her website Profit With The Planets. An eclipse is always, always a cover-up.

The China Crisis of March-April 2022

In March and April 2022, we find the following transits. The perfect storm for China. I am looking at the signs of economy (Taurus, Scorpio) and government, big business (Capricorn) but also Communism itself (Aquarius). All these transits trigger the China chart, which I scribbled on  (top of page).

Why is this a crisis for China? Because it’s a Grand Cross. A Grand Cross is when transiting planets line up in the same element, at sharp angles to each other. This happens April 3rd-8th 2022 as Saturn at 22 Aquarius is in a Grand Cross with the True North Node at 22 Taurus and True South Node at 22 Scorpio.

This is the China trigger, because she was ‘born’ with the Moon at 21 Taurus (very close) and Neptune at 22 Cancer, the sign of property development. They call them spreadsheets in the sky. Those ugly Capricorn mountains of greed and social climbing.

We can pinpoint the crisis date further because Mars goes to 22, 23 Aquarius (Communism) on April 5th and 6th. That’s public rage. Remember, we’ve not seen the nodes in the signs of economy, Taurus and Scorpio, or Uranus (the revolution) in Taurus since the war. I’ll be astonished if the current Chinese leadership lasts. For whatever reason – by 2023.

The end of old China (and the end of Communist China, Made in China) comes during that perfect storm period, pulling in the non-reality of their property market (Neptune rules bubbles) but also the really big one, the transit of Pluto at 28 Capricorn for the first time in over a quarter-century, landing exactly on the natal Uranus at 28 Capricorn in the Chinese chart.

We have timing for this. It translates as a deep change in the. balance of power – so this has to be Xi doesn’t it? Right across the very top of Chinese power and wealth. China was born to disrupt herself. She was born to see periodic upheaval and revolution in ‘the system’ and it’s back. In fact, it is so ‘back ‘that we will never look at this country the same way again.

Dates? Same window. Pluto goes to 28 Capricorn from March 11th 2022 to June 21st 2022. That’s the first pass. The second pass is January 12th 2023 until February 11th, 2023. During this period, the crisis deepens and reverses for China, with its leadership – but also with its place in the world order.

The final pass of transiting Pluto (takeover, change in the balance of power, critical transformation) at 28 Capricorn (the old system, waiting for disruption) is July 28th 2023 until September 19th 2023, which is when the nodes move to those old war positions involving Japan, Italy and Germany. This pulls in the European Union and the United States of America.

Pluto is in a conjunction with Uranus in the China chart for the last time in our lives, when he goes back to 28 Capricorn from November 2nd 2023 until December 20th, that year.

This is the most radical change to the Chinese economy (Made in China, manufacturing, spreadsheets in the sky) that she has experienced for a quarter-century and more. Not only do we find Pluto at 28 Capricorn on the natal Uranus at 28 Capricorn, the sign of status, position, the government, the hierarchy, the world order – we also find transiting Uranus itself at 21 Taurus, in an exact conjunction with the Moon at 21 Taurus, the sign of the economy, in the chart for China.

We can narrow these dates down again to November 2nd to 14th in the year 2023, which is a fair way into the future as I publish this on 4th January 2022. We should all be watching China and her relationship with foreign countries (us) then. Ceres is usually ignored by most astrologers but I predicted Brexit with her. She shows up at 24, 25 Scorpio (the banks) on November 12th, 13th, 14th, 15th 2023 – so this looks like a massive deal at a critical time for China. Ceres will be in a conjunction with China’s Venus at 25 Scorpio (banks and mortgages) then – but also in opposition to China’s aggressive Mars at 24 Taurus, the money and economy sign. That 1912 Chairman Mao chart is about to be well and truly triggered. Cue exploding little red book.