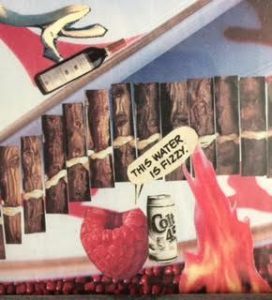 On Monday the Venus-ruled Libra Moon quincunxes retrograde Uranus and trines Saturn. Venus in Saturn-ruled Capricorn is retro, so the collective mood brings focus to change as it refers back to what we used to value versus the investments we are facing in the future.

The mood rewards breezy boundaries… as in, NO I’m not doing that stupid thing on a whim; I HAVE PLANS.

Tuesday morning, the Moon finishes up in Libra with squares to Mercury, Venus, and Pluto and a 29 degree trine to Jupiter at the very end of Aquarius. The Jupiter aspect is a huge, billowing spinnaker sail that pulls a cardinal mood through the challenge of communications, senses, values, and intensity that push back against an airy need to keep things civil and “nice”. It’s nice, but it’s CRISP. Chilly. But keep going and it’s exhilarating. Feel the power!

The Moon then moves to Scorpio and Pluto’s rule: deep. Dark, powerful. Like a dive off a springy board – in slow motion as you plunge. Tuesday night, Jupiter moves to watery Pisces: Fortune under the sea, moving in waves, exciting the entire ocean.

Early Wednesday, the Scorpio Moon sextiles the Capricorn Sun, and Mercury crosses back over retrograde Venus. The Moon goes on to oppose Uranus and square Saturn, and winds up in trine to Neptune. Examine motives and witness the details. It’s a shake up, but the boat has ballast. We feel the motion, but it’s possible to understand that whatever the tumult, we’ll make it to port. Have faith and believe.

Wednesday afternoon, the Sun squares Chiron and Mars sextiles Saturn. The time has come to act. Opportunities present themselves like footholds as you climb. Expect the next one to arrive, even if that is scary. Risk is part of every extraordinary life. Make sure you’re on the right mountain first tho.

Early Thursday, Mercury moves over Pluto. You’re going to know if it’s the right mountain. You’ll either know, or someone will tell you. Thursday’s Scorpio Moon sextiles Venus, Pluto, and Mercury. If you feel as though you’re in the flow, you can trust the feedback you get. We’re getting somewhere.

By afternoon, the Moon moves to Sagittarius and a square to Jupiter in Pisces. Does it feel like you’re going to fast, or do you like that sensation? That’s a matter of personal taste.

Friday morning, the Sadge Moon trines Chiron and sextiles Saturn. The Sun moves into trine with retrograde Uranus. The collective mood burns with healthy verve, fueled and turning on Aquarian fuel. The order of the day serves up a novel path and a new groove. This would be a GREAT day for a ramble: Just head out and see where you go.

It’s a particularly volatile combination of energies, but they’re all so well situated, that you’d have to work extra hard to apply any actual danger. I like that. It’s bursts of energy with fire and fuel, but there’s safety and mastery built in. It looks fun and loud and fast moving, but it doesn’t lend itself to getting out of hand in an worrisome manner.

I’m a curmudgeon and I don’t like loud, banging things. So I’ll never be pleased by fireworks; but I bought new earplugs and I bet they do the trick.