Ever popular on Twitter (where images of him, like this one, have been viral right throughout the virus) Nostradamus is easily the astrologer with the longest paperback shelf life in the world. There are good reasons for that. He is specific with names. And – if you know the astrology – timing.

The World Health Organization (WHO) began renaming COVID-19 variants in the first half of 2021, using Ancient Greek letters.

The Greatest Psychic Astrologer of All Time?

In doing so, they might just have made Nostradamus the greatest psychic astrologer of all time. In the quatrain below, from a 17th century translation of the famous prophecies, is a clear reference to Kappa, Theta and Lambda. The word mors, which follows, is Latin for death. The rest of the puzzle is in the first three lines.

Nostradamus authors over the centuries have interpreted this to mean all sorts of things (including American space exploration) but it’s actually very simple. This is about the European Union and it is about three COVID-19 variants, we are just beginning to know. It would be a mistake to interpret this with any finality in June 2021. There is more to come. 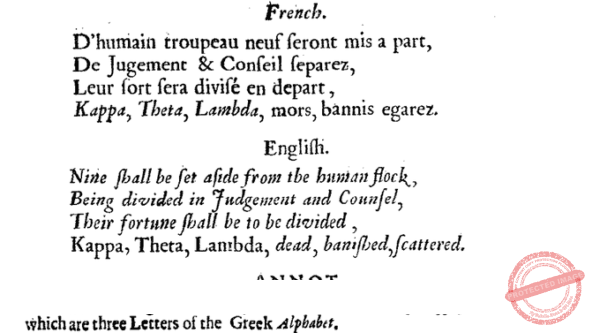 The Lambda variant, which was first found in August 2020 in Peru, has been called a “variant of interest” by WHO after being detected in at least 29 countries, mainly throughout Latin America. We already know about the Kappa and Theta COVID-19 variants, from India and the Philippines respectively. Now, turn your gaze back to the first line of the Nostradamus quatrain. Here is the word ‘troupeau’ from a French website, some 500 years later, discussing vaccines. The modern interpretation of ‘troupeau’ is herd. So, Nostradamus saw a future headline about herd immunity. As below, L’immunite de troupeau.

In June 2021, we have to wonder, if we’re talking about herd immunity – why name Lambda, but not the Indian variant, Delta? After all, it is Delta that is most concerning epidemiologists in the United Kingdom, as it is evading even double vaccination.

The answer to that is really that Nostradamus usually has his reasons. For that, we have to look at the rest of the quatrain. Lambda comes from Peru and is a problem in South America. Yet it is now in 29 countries. Some of those countries may indeed involve the ‘nine’ predicted, in the original forecast, explained below. This is a recent take on Lambda.

Nine or Neuf in the Nostradamus Corona Prediction

What is really striking about this quatrain, above, is its reference to ‘nine’ or, as every schoolchild in French class knows, ‘neuf’ in the first line. Who or what, are the nine?

Nine Countries and a Corona Bond

Well, nine European Union nations in April 2020 moved to support the launch of ‘Corona bonds’ – a debt measure to help support the health industry, during the pandemic in Europe. This story ran in the Financial Times (below) some 500 years after Nostradamus first wrote his prediction. “Nine eurozone countries issue call for ‘coronabonds.’” What is also interesting about this story is the image of a bull. Now, that’s obviously about a bull market, from a financial media perspective. Yet, as an astrologer, Nostradamus may also have been seeing the North Node in Taurus, which begins in January 2021. His clairvoyance, over five centuries into the future, may have tried to make sense of both words and images. (In astrology, the North Node in Taurus is heavy financial karma for the world economy).

The Nine Countries and Nostradamus’ Predictions

Germany and the Netherlands opposed those nine E.U. countries hoping for the Corona bond. Thus the separation and division Nostradamus mentions. As a Frenchman, he would have been concerned that France, Italy and Spain were in the nine, but two of the European Union nations rejected the plan.

Below, The Sun among other newspapers gave widespread coverage to the new WHO names for COVID variants.

The Corona Virus and Nostradamus’ Methods

Nostradamus ‘heard’ names, sometimes slightly wrong by a letter or two. Hitler was famously recorded as Hister. Vladimir Putin turns up as Butin.  In my forthcoming book, The Secret Language of the Stars, I will look at the three great languages of astrology (English, French and Latin) and how Nostradamus juggled all of them on several psychic channels.

Just translating from French to English doesn’t always work with The Prophecies. My edition was translated in 1685, over a century after Nostradamus had recorded his predictions. The translator, Dr. Theophilus de Garenciers was doing what so many Nostradamus authors have attempted ever since: pure linguistics.

Once you realise that Nostradamus was seeing whole newspaper front covers, in English, the quatrains become clearer. Translation isn’t enough. You have to see what he, clairvoyantly, saw.

The word ‘corone’ has traditionally been translated as ‘crown’ and thus associated with various Kings or Queens, since Nostradamus first published his prophecies in the 16th century. This is a good example of a corone/corona quatrain, below. Some things stand out about timing. The river and the new Celtique, or Celtic. Is this Ireland or Scotland, reborn, after Brexit? You can see the word ‘Empire’ and discord. The young Prince. Is this Harry?

Once the timing is understood in the quatrains, which can cover the same basic subject matter, but over four sentences, cover two or three years, the astrology can be decoded too. The above quatrain is clearly about the 2020’s, but each line covers a different news story, some months apart. And some of it is yet to be revealed, although the astrological future of Scotland has shown independence, for some years now.

Perhaps this is Nostradamus’ world and we’re just living in it. In which case we’ve ended up in a very strange place indeed.  So what can he tell us about the origins of COVID-19 – and our hope for a happier and better future?

Putting the puzzle together, means trying to decode the great astrologer’s peculiar blend of English, French and Latin – which is truly, the secret language of the stars.

One thing is certain about Nostradamus. Given that the astrologer was peering so very far into the centuries ahead (he was easily the most ambitious psychic of his time), it would be a mistake (and has possibly always been a mistake) to translate the quatrains, up to the present day.

For all that he has given us a complicated puzzle to solve, Nostradamus also gives some literal clues. If we wait long enough, they literally appear in the news.

What the most famous French astrologer of all time has done, with his COVID-19 variant forecast, is not only name a mutation of extremely new interest to WHO; he has also hinted at a split within the European Union, ahead. And the United Kingdom.

Now, what do you think?